My paternal grandfather Frederick John Edwin Backler was born in Walsall in 1900.

The family moved to Warrington, with my grandfather being one of ten siblings.  During the First World War, he enlisted in 1915 in the Army, under age at 15, and was posted to the Summerdown recuperation camp for wounded soldiers in Eastbourne, East Sussex, UK.  He died in Pevensey Bay, near Eastbourne in 1968 and I remember my father receiving the sad news when we lived in Haverfordwest.

He met my grandmother Violet Chatfield (1892-1985) at an Eastbourne Town Hall dance and they married in 1919, taking up residence in nearby Pevensey Bay.  Pevensey, which has the Latin name Anderida, is famous for being the place where William The Conqueror landed in 1066, prior to the Battle of Hastings.  Anderida is embroidered in the Bayeux Tapestry to commemorate this event.

A castle was built by the Romans and on the east side of it, there is the small village of Pevensey, which is about one mile inland from Pevensey Bay.  The Roman castle has a Norman castle constructed within it and on the west side of it is the larger village of Westham, which has St Mary’s church, the first the Normans built in 1080.  My mother Theresa Finn still lives in this village.  Next to the church is a primary school that I attended.

My father Donald John Backler (1928 – 1987), joined the Royal Navy as a sixteen year old, at the end of the Second World War.  In the Royal Navy he worked on aircraft electronics in the Fleet Air Arm, rising to the rank of Chief Petty Officer, by the time he left in 1968 after completing 22 years adult service.  He married my mother on 1st December 1951.

I was their first born, Raymond John Backler, born in 1952 and at the age of eleven, John Fitzgerald Kennedy was assassinated on my birthday, which provoked my lifelong interest in American history.  My doctorate specialises in the American Civil War, but my interests cover a wider spectrum of military history.

We were posted to Malaya and then to Singapore, during the communist uprising, where my brother David Thomas Backler was born in 1954.  This picture is of me and David with my Mum and Dad in Singapore. 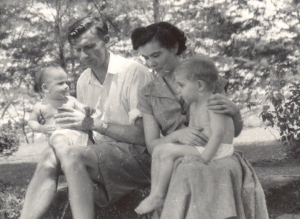 My father served on the aircraft carrier, HMS Theseus, during the Korean War.  When we returned to the UK, my father was stationed at Ford, near Rustington in West Sussex, which is where I started school.  My brother Paul Backler was born in 1957, whilst we lived there, in the Zachary Merton hospital in nearby Littlehampton.

My father was posted to Northern Ireland in 1958 and we lived in Strand Road, Londonderry where I continued my schooling.  Either side of going to Northern Ireland we lived with my mother’s sister (more on that in a later blog) and on both occasions, I went to school in Hailsham, East Sussex, but in different buildings, as the one in the High Street closed and is now a pizza restaurant.  On our return from Londonderry, my parents then bought a small cottage in Westham, where my mother still lives.  My brother Laurence Backler was born in this house in 1959.

My father served overseas on the aircraft carrier, HMS Centaur, shortly after we started living there.  Twice I was ferried along with my mother on a tug out to Spithead and we stood on the deck as this mighty aircraft carrier came into Portsmouth Harbour, with all the sailors lined around the edge of the deck in their finest dress uniforms.  On one of these trips my cousin Teresa came too, and we were featured on the BBC News along with my Dad.  I have never seen the bulletin, but we were told about it when we got home.

For my father’s last four and a half years in the Royal Navy, he was posted to the Royal Naval Air Station at Brawdy (HMS Goldcrest) in Pembrokeshire in 1963 and we lived in married quarters off the Dale Road in Haverfordwest.  David and I attended Barn Street Boys primary school and Paul and Laurence attended Fenton Infants, moving up to Barn Street Boys after I had left to go to the Grammar School.  David and I also attended the Sea Scouts in the married quarters community centre and we belonged to the 6th Haverforwest (Goldcrest) troop.  I played rugby for Haverfordwest Grammar School Junior team on most Saturday mornings and then, on many Saturday afternoons, I went to watch Haverfordwest County play soccer in the Welsh Premier League, in the era when Ivor Allchurch and Mel Charles finished their careers there.  I also started my cricket career here, making up the numbers for Haverfordwest second team.

In April 1968, we moved back to our house in Westham that had been rented out whilst we lived in Pembrokeshire and I completed my secondary education at Bexhill Grammar School.  My Dad arranged for me to join Pevensey Sports Club and I played cricket for the second team, with the odd appearance for the first team.  I also played soccer for the adult third team, but then played for the Under 16 and  later the Under 18 teams.  We were runners up in the Eastbourne Under 18 League in my final season there, losing a play off against Eastbourne United.  My youngest brother, Liam Backler was born in 1971 in Upperton Road Nursing Home, Eastbourne, where I was also born, when we returned to Westham.

They lived near us in Hankham, rented our house for part of the time when we were in Pembrokeshire and then bought a cottage two doors away in the same block in Westham, where my Aunty Barbara still lives.  My Uncle Laurie was in the army in the Second World War, became a prisoner of war in North Africa and then worked as the operator of a pole hole boring machine for Seeboard (now EDF Energy) for the rest of his working life.  They have two sons, Mark Backler (born 1962) and David Backler (born 1964).

My uncle Robert Edwin Backler (born 1930), always known as Uncle Bob, is my father’s younger brother.  He lives in Hampden Park, a suburb of Eastbourne and worked all his life until retirement as a postman.  He was married to Betty King in 1955 in Eastbourne and they had one son, Peter Alan Backler (born 1958).  My parents called her Betty King to avoid confusion with my father’s sister.  The picture below shows left to right: me, Laurence, David, Paul (front), Mum, Dad, Betty King and my cousin Peter on the beach in Pembrokeshire.

My aunt Betty June Backler (born 1933 – died 2016) was my father’s sister and she lived in Eastbourne.  She was married to Norman Brown in 1955 in Eastbourne, until his early death during the National Teachers Strike in early 1970.  She worked all her life for Seeboard in the accounts department.  Uncle Norman was a soft drink delivery driver and, as children, we always looked forward to his visits, as he invariably brought some cherryade or something else of a fizzy nature.  My aunt had a keen interest in researching the family tree.  The picture below shows her and Uncle Norman on her 21st birthday.

My grandfather was a keen pianist and a fan of The Archers.  He was a builder and worked for Percy Holter of Pevensey Bay and then for much of his career at another builders in Polegate.   He had an older brother, my great uncle Bill, who I remember visiting from Warrington on two occasions, the second time with a cousin of mine who was quite a bit older than me called Kevin.

There will be more on the Walsall and Warrington Backlers in a later blog.

UPDATE 28th JULY 2020:  I have just returned from my uncle Bob’s funeral, who sadly passed away on 12th July at the age of 89.  He was the last of my Dad’s siblings and the end of that generation of East Sussex Backlers.  I last saw him at my Mum’s 90th birthday party on 8th September 2019.  The photo has him on the left, my Mum in the middle and aunty Barbara on the right on that day.  One thing I learned yesterday was that Uncle Bob served on HMS Theseus in 1949 as part of his National Service a couple of years before my Dad served on the same aircraft carrier. 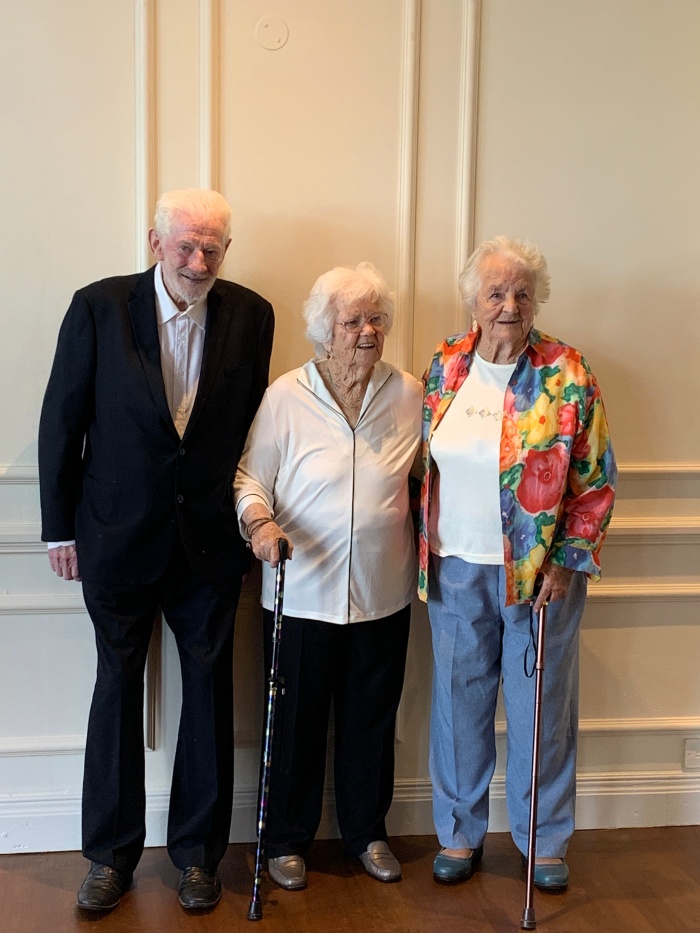