Before venturing up to Manchester for my Grandmother, Kate Finn’s 90th birthday in September 1985, my Mum met up with her sisters at her house in Westham, near Eastbourne and I travelled over to meet them.  This photo shows me on the right, with the tie, and Albert Hart, Aunty Betty’s husband on the left.  Aunty Annie had travelled over from America, and Aunty Maureen, Aunty Betty and Uncle Albert had come down from London, to meet up with my Mum and my Aunty Kath, who also lived in Westham.   The photo shows: my Mum in the red, Aunty Kath in pink, Aunty Maureen in white, Aunty Annie in lilac and Aunty Betty in brown.  Someone left the lights on in the living room! 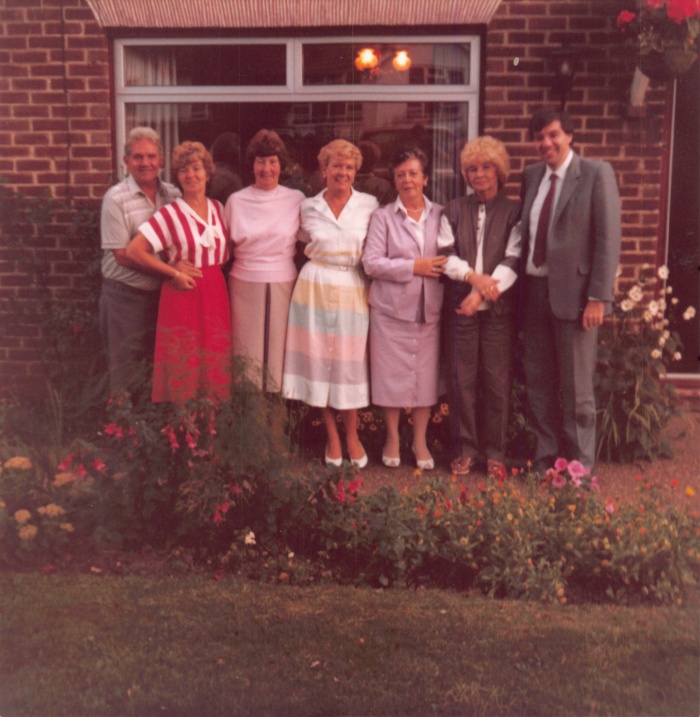 My Grandma had a lovely cake:

At the back are Aunty Betty, Uncle Tommy (grandma’s youngest son), Uncle Fred (Aunty Kath’s husband), Aunty Kath and Aunty Ann.  My Mum, Theresa is front left and Uncle Michael is front right (grandma’s oldest son), sitting next to Aunty Maureen.  But some were missing from the photo and although the next one has mostly the same people in it, there are some not in the above photo.

Aunty Betty has moved to just behind Uncle Michael and his wife, Aunty Eileen, is just to her left and Aunty Peggy (Uncle Tommy’s wife) is in the rear right corner.  Somehow Uncle Frank (Aunty Maureen’s husband) was missed from these photos, but I suspect he may have taken most of them.   The next photo is included for this reason:

Uncle Frank is front left and my Mum looks like she has dropped something or is struggling to sit down and if it wasn’t for wanting to include Uncle Frank, I wouldn’t have put this picture in.

The reason these photos are important is because, as far as I can tell, it was the last time that the family was together in one place.  Of the people in these photos, only Uncle Tommy, Aunty Maureen and Aunty Annie are still with us.  They all gave her a rousing 90th and I was told that everyone had a good laugh.